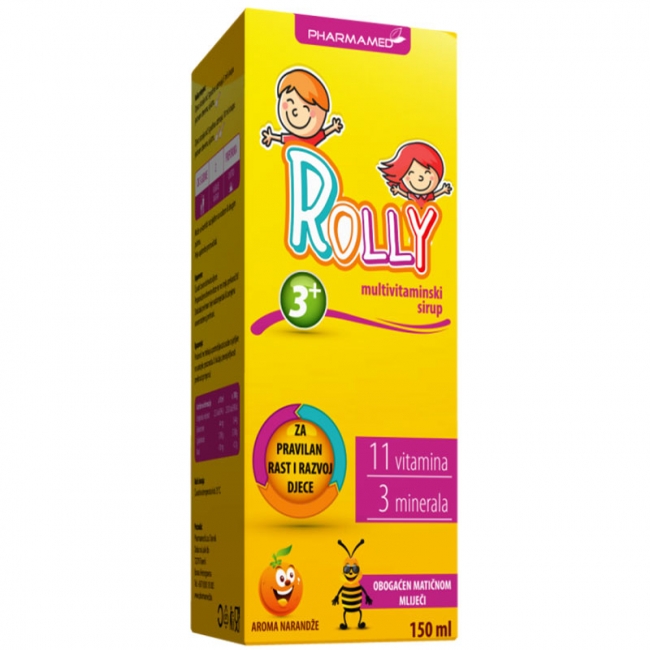 Rolly multivitamin syrup is a complex of vitamins, minerals and essential oligoelements to help overcome the deficits of children and promote their vitality and well-being in everyday life. Royal jelly is also help to strengthen the immune system, to keep them in high shape throughout for all the year.

Calcium
Calcium is the most abundant mineral in the body. 99% is located in bones and teeth. This is mainly thanks to it that the bone is rigid and strong. Calcium is also found in the body as free (not stored in the bones and teeth), and is used in many reactions. Indeed, the calcium has many other functions that enter into the composition of our bones. It is involved in the regulation of cardiac and muscle contraction, blood clotting. It participates in cellular exchanges, nervous system functioning and the release of certain hormones. It works in synergy with vitamin D. It is essential for the absorption of vitamin B12 and participates in iron metabolism. If for some reason, there is a lack of free calcium, calcium is drawn in the bones, which leads to bone fragility and eventually osteoporosis. It is essential to have an adequate intake of calcium.

Magnesium
Magnesium occurs at three levels:
- This is a plastic element, essential for skeletal system
- This is an activator of many enzyme systems, therefore a necessary element in cell metabolism
- It is a neuromuscular regulator, which reduces the excitability of the nerve fiber and the muscle fiber, which helps relaxation of muscles
Its soothing action on the central nervous system balances and completes that of calcium.

Iron
Iron is present in hemoglobin in red blood cells that carry oxygen to all cells. It is also found in myoglobin, a similar substance to hemoglobin, which helps the muscles to put oxygen in reserve. Iron is essential for the production of adenosine triphosphate (ATP), the primary source of body energy. It participates in several physiological processes, such as regulation of cell growth and differentiation. Iron is present in the production of many proteins and enzymes and in the synthesis of several neurotransmitters. It is necessary for the
metabolism of vitamin B. It stimulates the body’s defenses and increases vitality. For a good absorption of iron from food, it is important to consume vitamin C.

Vitamin C
Vitamin C is involved in many biological reactions, it is known for its stimulating effect. Vitamin C strengthens the immune system. It stimulates the body’s immune defenses against microbial infection through its action on the synthesis of antibodies and white blood cells. It is also recognized for its antioxidant properties, it plays a role in reactions that neutralize free radicals. It is also involved in vitamin E regeneration. It is also necessary for the absorption of iron in the body.

Vitamin E
Vitamin E is a liposoluble vitamin (soluble in fat). This is a group ofcompounds called tocopherols. Vitamin E has a strong action antifree radicals. In fact, it helps neutralize free radicals which can block in fatty tissues of the body. Vitamin E plays an essential role inprotecting cell membranes, composed of lipids sensitive to oxidation.

Vitamin B3 or PP
Vitamin B3 or PP plays a role of coenzyme in many reactions in thebody. This allows to supply energy. Indeed, it is involved in glycolysis(breakdown of glucose). In addition, it is involved in the biosynthesis of fatty acids and steroid hormones. Like other B vitamins, it is important for the health of skin, hair and nails, it stimulates the production of keratin.

Vitamin B5
Vitamin B5 also called pantothenic acid participates in the body’s use of carbohydrates, fats and proteins. It plays a role in the synthesis and oxidation of fatty acids. It is associated with the synthesis of steroids, cholesterol derivatives and heme in hemoglobin.

Vitamin B1
Vitamin B1 is an essential vitamin for the metabolism of carbohydrates. It allows the conversion of carbohydrates into energy. It is considered as a tonic because it is necessary for the good functioning of the nervous system and the muscular system.

Vitamin B12
Vitamin B12 is needed for cell growth and renewal including the formation of red blood cells. It is involved in the metabolism of carbohydrates, fats and proteins for energy production. Vitamin B12 is necessary for the good functioning of the nervous system because it protects the myelin sheath and participates in the transmission of nerve impulses.

Vitamin B2
Vitamin B2 or riboflavin acts in many oxido-reduction reactions. It is involved in the general metabolism of carbohydrates, fats and proteins and more particularly in the oxidation of glucose responsible for the release of energy. Vitamin B2 plays a role in the synthesis of keratin (structural protein of the skin, hair and nails).

Vitamin A
Vitamin A plays an important role in vision but also in bone growth, reproduction and immune system regulation. It contributes to the health of the skin and mucous membranes (eyes, respiratory and urinary tract, intestines), who are our first line of defense against bacteria and viruses. It is essential for cell growth and differentiation, as it participates in the transcription of certain genes and in the synthesis of certain proteins. It also promotes the absorption of iron and may play a role in the regulation of inflammatory responses.

Vitamin B9
Vitamin B9 is involved in growth and cell proliferation. It plays a role in the renewal of all body cells (red blood cells, white blood cells, ...). Thus, it promotes the good functioning of the immune system and the good oxygenation of cells. It is associated with the good functioning of the nervous system in particular in the production of neurotransmitters, it also helps in the good development of the embryonic nervous system. It also acts as a coenzyme in the production of several amino acids such as methionine, glycine.

Vitamin B8
Vitamin B8 or biotin is involved in many chemical reactions in thecells for the use of carbohydrates, fats and proteins. Vitamin B8 plays a role of coenzyme in lipid metabolism and in the synthesis of fatty acids. It also plays a role in the catabolism of carbohydrates and the synthesis of amino acids, which result in the production of energy. Such as B vitamins, it has a positive effect on the skin, nails and hair. It protects the skin, mucous membranes, nails and slows down hair loss. It also promotes the use of vitamin B9 and B12.

Royal Jelly
It is a product of secretion of bees who feed all larvae in the colony during the first days of their lives and queens throughout their existence. Royal Jelly is a milky and gelatinous substance composed of essential nutrients vital for the body : carbohydrates, proteins, fats, vitamins, minerals and oligo-elements. The set is a rich nutritive concentrated which allows the royal jelly to be considered revitalizing, energizing and balancing. Royal jelly is traditionally known for its stimulating and toning properties, it increases intellectual and physical capacities, and stress resistance. It is traditionally recommended to combat tiredness in cases of fatigue and overwork.

“Pharmamed” is a manufacturer of herbal products, herbal health products, dietary products, cosmetics and an exclusive supplier of Salus Haus. The company was founded in 1997. In “Pharmamed” – to respect the world’s highest standards for the pharmaceutical industry, provisions of the European Pharmacopoeia, GMP, GLP regulations. | More ...